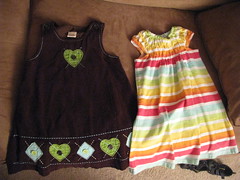 I recently picked up a bunch of second-hand clothes for Rosie and thought I'd share on the off chance that someone besides me finds it interesting how we dress our daughter. The sandals in this picture, for instance, are officially boys shoes. We pick from both boys and girls clothes for Rosie, and don't sweat it when strangers think she's a boy.

We try for a variety of clothes and colors, but avoid most anything that's branded, especially character-branded, unless it's with certain superhero logos. Disney stuff and such, for instance, we don't use - in toys or clothes. These goals make it a little hard to shop for her, but I find it's easier at secondhand sales and thrift stores. Also, we've been really lucky in hand-me-downs from other parents who don't believe There Are Only Two Colors and Pink is for Girls. Which is such a ridiculous trend in marketing.

Also, Kohls. Kohls is great. And the Oshkosh brand, but we get it secondhand 'cause it's not cheap new.
Subscribe