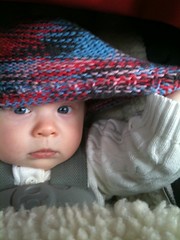 What?
Originally uploaded by netmouse.

Rosie is almost 5 1/2 months old and is learning to anticipate, so games are starting to be fun. A favorite is to put her on top of your head and then spin around looking for her ("Where's Rosie? Where's the baby?" -- turn, --turn "Oh, there's the baby!" --bring her down. --giggle). She also likes flipping upside down, and catching toys that are moving past her. And standing. She's really keen on standing and usually prefers it to sitting, though she still needs help with both - very close to sitting on her own, though!

Her first giggle was New Year's eve. She giggled when I blew a raspberry on her belly during a diaper change. I called Brian in and we did it again so he could hear. :) She has some giggly days, but also likes doing pterodactyl-like screeching, and blowing her own noises through her lips, often with lots of accompanying spittle. :P Last night she was also clearly saying syllables: "Ba, ba, ba."

Last week Brian let her have her first solid food -- she tried to steal a piece of canned peach and he let her have a little bit. And Tuesday was another first! She can now get her toes in her mouth all by herself! We're very proud. I try to give her some time every day with bare feet so she can play with them. She also likes to play with cloth, as you can see in this picture. Check out the rest of the set I just posted to see where that gets her!