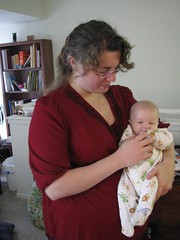 So long!
Originally uploaded by netmouse.

Rosalind went in for her "two month" pediatrician visit last thursday, actually ten days after her two month mark. She weighed in at 10 3/4 lbs and measured 23" long with a 16" head circumference. So if she's continued to gain about an ounce a day, she's probably around 11 lbs today.

My sister asked about her clothes size, so I measured her nape to butt while dressed -- allowing room for the cloth diaper -- and that is 14" ( collar to crotch, basically). She's roughly 19" collar to toe. She has onesies with feet that are long enough for her body but tight on her toes, and vice-versa. She's above average length for her age so she's well into the sizes marked 3-6M and 6M. Her head is especially big - in the 80th percentile, so if you're thinking of giving her a hat, keep that in mind.

She actually has more than enough onesies this size but mom and I are going shopping soon to look for another hat and a couple jackets or hoodies. She doesn't have many clothes the next size up so that may be my first significant clothes shopping task, once she grows out of the current size. In this set of pictures you can see the awesome hat that she does have, which was knitted by my friend Anneliese. I expect to add pictures to that set until the 3 month mark comes around in a couple weeks.

Rosie also got some major (DTAP) vaccinations last week, including Pertussis (whooping cough), so I'm starting to feel more comfortable taking her out in public. I got my shots Friday morning, including the flu vaccine. Those kind of kicked my butt most of the weekend (and the spot where the DTAP went in is still sore and swollen), but I'm glad to have them.

Rosie's just gotten this long in the past couple weeks, so I'm still adjusting to how to hold and carry her at her new size. It will just keep changing, too, won't it? :)