We Can Haz Couch! 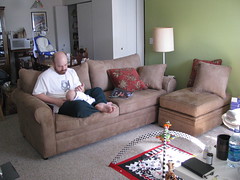 It was a very transitional weekend.

On Saturday we finally received the sofa and storage ottoman (plus 4 pillows) that we ordered in early July (just 5 weeks or so late - it was originally due at the same time as Rosie). Yay! Couch!

(it's kind of big for our apartment, but we ordered it with an eye to the future. Plus, Brian's, well, he's not a small guy, you know? We wanted him to be able to take naps on it, which he can, especially since those back cushions are removable! Pillow fight! Woo!)

Another change over the weekend was my C-section wound tube got too small/tight for Brian to comfortably pack it with gauze tape. So we covered it over with just an external dressing and on Monday the opening was mostly closed so we taped on a bandage and I did *not* wear a burn netting tube all day to hold on the dressing, for the first time in 4 weeks. Yay! Hopefully it heals the rest of the way with no further complications. Probably related to that, on Friday I took my first walk at what felt like a normal pace without it being uncomfortable

I also became the sole head of the art project for renovation next year (more on that later).

And finally, we made the switch (which I think will work out, at least for the next few months before we start Rosie on solid foods) to cloth diapers. We already had the diapers, we were just waiting until we were ready to deal with the laundry. Rosie will sit in a wet cloth diaper, it seems, for ages without complaining, which is better than Luvs, in which fussing over a wet diaper was minimal, and Huggies and Pampers, in which a wet diaper was a Crisis! of Major Proportions!

Now we just have to relearn how to notice when her diaper is wet. Poopie diapers don't cause a fuss either, except in the evening when she's fussy anyway, but we usually notice when she fills her diaper that way. Ah, the fascinating topics of early parenthood!

We're still not sure if she's teething, but occasionally she gets nigh-inconsolable and the half dropper of Tylenol recommended by the pediatrician seems to transform her back into a baby we can comfort and lull to sleep.

Rosie will hit eight weeks old late tonight/early tomorrow, and I've posted some more pictures from the past week - see how big she's getting?
Subscribe