Who says the internet is for pictures of _cats_? 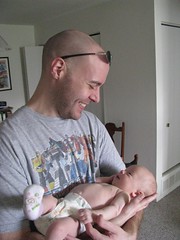 Loved watching these two smile at each other
Originally uploaded by netmouse.

You all seem to enjoy pictures of the baby, so here are some more. Rosie's 5th week included her one-month birthday, celebrated with a low-key visit with a couple friends of Brian's and a game of Quiddler which Rosie and I won! Advantage-Baby!

She seems to be starting to smile socially, or at least to mimic other people smiling, as Brendan discovered when he came to visit on Tuesday. And just in the last couple of days, she's gripping things with her fingers - hasn't quite figured out how to open the hand on purpose, but she's getting there, and she'll hold it closed even against tension - I put a pen in her hand the other day and she held it until I took it away. Similar explorations with the hands have also led her to discover her thumb, so sometimes now she is self-soothing herself with sucking on her thumb or fingers and not needing help from us.

We had a check-in with the pediatrician yesterday and she weighed in at 8 lbs, 8 oz. That means she is continuing her 1-ounce-a-day growth rate, which is fabulous. She and I have been struggling a bit in the last couple of weeks with what's probably a case of thrush brought on by the antibiotics they gave me when my C-Section wound re-opened, and that caused some breastfeeding issues, but we're getting treated for it and we're getting back on track.

Unfortunately, that mixed with the fact that my wound still needs dressing twice a day and has a tunnel under the skin that's still 4.5 centimeters long means we've decided *not* to try to travel this weekend. Going to Chilicon would have been nice, but we're not up for it, alas. We'll just have to catch everybody some other time!