The first half of our father's day 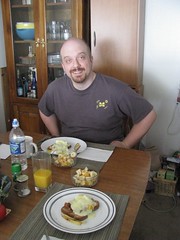 Was all about Brian. Brian treated me really well on mother's day, so for father's day I tried to do the same. A lack of butter prevented me from making him a return batch of cookies, but he had made crab cakes the night before, so I suggested crab cake eggs benedict for breakfast and after we slept in as long as we could we collaborated on that project and Bri opened a card from me and such.

After that was storytime for the baby! Bri read her some Shell Silverstein poems. Then we went back to bed. Around 2 we woke up again, and eventually we stumbled out of the house and over to mom and dad's, where we had a nice dinner and gave papa some prezzies and generally tried not to be too much like zombies.

I'm in the third trimester of pregnancy; various side effects of that are making our sleep pretty disrupted, so some extra sleep was in order as you can tell by the circles under Brian's eyes.

And now we have more butter so perhaps today I will get the cookies made.