What we did over the weekend 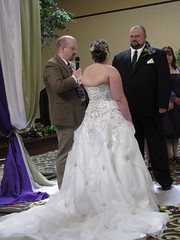 Over memorial day weekend, possibly *the* most heavily booked sf convention weekend of the year, we were not at a convention, but we were involved with a wonderful gathering of geekly friends. We were busy marrying a couple of our best friends, the couple who introduced *us* to each other, Lucy and Scott.

We were literally busy marrying them, since Brian was their officiant and I gave a reading and helped out in little bits and pieces around the edges as well. This wedding took almost as much of our time in May as our own, since we also attended Scott's bachelor party (and I sat in with KT and Melanie and Carrie for an afternoon in April to help prep for that), and I attended Lucy's bachelorette party, and we met with Scott and Lucy for dinner and to finalize the ceremony plan, and then there was the rehearsal dinner, and finally the wedding. Because these two are as cool as they are, many of those events involved games and they were all very fun and cool and filled with nifty people. We were really honored to be involved and are very happy to share their joy at their partnership, which I foresee being a long and happy one. :)

Here are some pictures from the rehearsal dinner and wedding.