My pictures from Cambridge 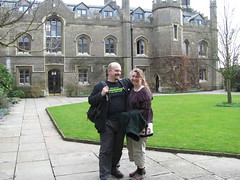 us ourselves
Originally uploaded by netmouse.

Not much labeled but at least online, pictures from Cambridge (also part of the larger TAFF 2010 set).

We're having a lovely time in Edinburgh. Took a hike up to Arthur's Seat today and enjoyed the mostly clear skies and incredible view. Secret they don't tell the tourists though? The West side is steep. The East side is not!. That's the side we came down. It was worth it though.

That was followed by a stint at the nearby Auld Hoose pub with Charlie Stross, Feorag, and some friends, and then a really lovely Kurdish dinner at Hanam with Charlie and Feorag. With a stop at another pub on the way back down the royal mile to the hotel. Just down Fleshmarket Close from the royal mile, actually.

This has been a really interesting leg of the trip!