Penguicon pictures from the past 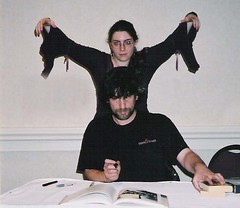 Yesterday I went looking for a document from before I got this computer and went into a whirl of looking through old files and deleting and moving them around, merging files from this computer, my old work laptop, and the computer I had before that, as well as CDs of backups from years past.

One of the things I came upon was this picture Jeff took of me and Neil Gaiman at Penguicon 2.0. It was in with my files on that year's Penguicon instead of being with my pictures from it (which were in my netmouse.com folder and not in with the rest of my pictures, anyway), so I hadn't seen it in a while. The rest of my pictures from that year I have previously only shared with a few friends, partly because there are pictures of me in a bikini and I used to feel more negatively about my weight and form at the time than I do now. Now you all get to see them.

Other people featured in the set from Penguicon 2.0 include Pete Abrams and his then-assistant Trillian, Neil's son Mike, Chuck, Rennie, and the rest of the gang who joined us for a pool party that Saturday night, followed by a "massage Trillian" party that was even more fun.

The set includes two of my favorite pictures that I've ever taken, this picture of Chuck and Rennie curled up together at the party and this one of Neil at breakfast on Monday, finally looking rested and ready for his drive back home (he drove here in the Mini Cooper that spring, partly I think to show it to Mike). During the time that Chuck and Rennie were together it gave me a warm fuzzy feeling to have given them an image of their closeness that they both liked. Even though they're no longer together, I hope they still like the picture; I certainly do. I also found it a powerful example of the way the noflash version of a picture can be so much better than the same picture with the flash on.