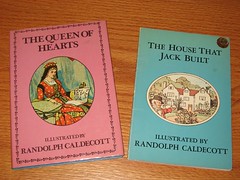 These were two books illustrated by Ralph Caldecott that I had as a child.
To quote from a book review,

The Caldecott Medal, established in 1937 by the American Library Association, is awarded each year to the artist of the most distinguished American picture book for children. While many people are familiar with this prestigious award, relatively few are acquainted with the English illustrator after whom it was named. Randolph Caldecott was one of the most popular book illustrators of the late nineteenth century. His picture books were issued two at a time every Christmas, from 1878 until his death in 1886. He chose the subjects on his own, drawing from a mix of age-old nursery rhymes, pieces by eighteenth-century writers, and nonsense he made up himself.

Once I was older, I progressed to paperbacks with few or no illustrations. Here are some favorites that I just brought home from my mom's: 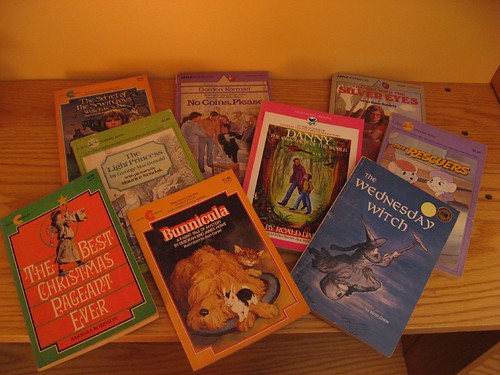 The Secret of the Seven Crows, by Wylly Folk St. John

The Light Princess, by George MacDonald, with pictures by Maurice Sendak

The Best Christmas Pageant Ever, by Barbara Robinson

Bunnicula, by Deborah and James Howe

Danny, The Champion of the World, by Roald Dahl

No Coins, Please, by Gordon Korman

The Wednesday Witch, by Ruth Chew

The Rescuers, by Margery Sharp, illustrated by Garth Williams

The Girl with the Silver Eyes, by Willo Davis Roberts

What were your favorite books back when you were still reading books that came with some interior illustrations?
Subscribe