Fireworks! Sparklers! And friends! Oh, my! 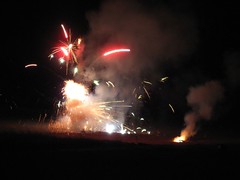 Finally posted the best of the pictures from the Fourth of July party onto Flickr. Many of them are fairly dark, but if you look closely you'll see that it is me, Lucy, and Katy doing the sparklers at different times.

atdt1991 took most of these pictures, except near the end when I took the camera back for a bit, then he took it back and told me to get into the group picture, then... I think Chuck took the ones where Scott and Katy are gesticulating wildly. Hard to know. Anyway, it was much fun and I'm still picking up firecracker paper and the odd bottle rocket stick, but it's totally worth it for the memories.