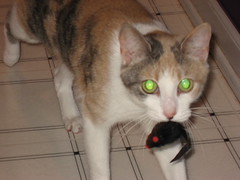 I took some pictures of Feliz (the cat) on wednesday. The flickr series starts here with her playing with this catnip mouse.

up until yesterday we'd been keeping her in just two rooms of the house but lately she's been really avid in her interest in the rest of the house (escape cat!) so last night and this morning I let her do some supervised exploring of the living room and some of the upstairs. to clear out toxic plant dangers I put the pointsettia out in the garage and put the christmas cactus way up high, though that's only a temporary solution since it won't get enough light where it is. Tracy already took away the ivy on Monday.

She's been lonely during the day, missing BIll, and a bit clingy in the evening. Last night I almost fell asleep with her in my lap, and tonight I expect I'll experimentally give her access to the living room, upstairs hall, and my room (in addition to the den & kitchen) so she can come find me in the night. So far she doesn't display any tendency to eat plants but we'll see how the spider plants are after she's been given extended access to them.