Shed in first snow of the year 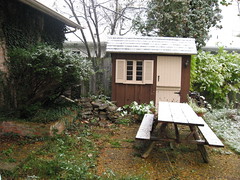 Shed in first snow of the year
Originally uploaded by netmouse.

It snowed this morning. The sun was just out, so I don't expect it to last long, But there was snow. I took this picture to document it, but also to note that I impulsively trimmed that bush on the left in the dark last night, with only the light coming through the garage door, which is just outside of the frame to the left. It was tremendously overgrown. I'm pleased to see I seem to have done a halfway decent pruning job in the dark.