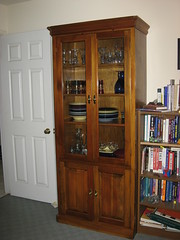 I bought a new china cabinet at a neighborhood yard sale last week. My sister noticed it as we drove by, actually, and we stopped and made the purchase in less than ten minutes because we were on our way to my grandmother's for lunch. Then some neighbors and Brendan helped deliver it a week later. It's a solid pine cabinet that the lady who sold it to me bought at naked furniture and then finished herself. I think it polished up nicely. I really like the warm tone of the wood, and the magnetic door fasteners.

It's fun rearranging the cupboards in the kitchen as I move things into the cabinet. Today I also brought a couple sets of glasses up from storage in the basement. I'm hoping to paint two of the exterior walls of the basement storage area on Sunday, as well as a section of the kitchen (the stripe of wall above the cupboards. I'm not sure what the right word for it is. It juts out and extends the width of the patio door and the window between the cupboards as well). Let me know if you're interested in helping or coming to keep me company during painting.