Visit with Bill in DC 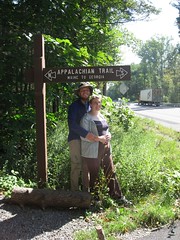 Anne and Bill on the AT near the PA/MD border
Originally uploaded by netmouse.

I just posted the pictures I took from visiting with Bill this week in a set on flickr.

On Tuesday I flew in to DC. Jenny picked me up and we drove to the Pine Grove Furnace state park, where we met Laces (Allison) and Bill at the General Store (The've been hiking together). This is a store that, during the summer, sells half gallons of ice cream for the Half-Gallon Challenge. But it was closed! (in the fall it's closed on weekdays) So we went on a quest to find them ice cream, and they undertook the challenge.

Laces was victorious (and very bouncy). Bill nearly went into insulin shock and said he couldn't finish. It wasn't that he couldn't eat anymore - afterwards we went to a local sub shop for lunch - it was the sugar. Go through the photo set for documentation. We dropped Laces back on the trail at a hostel and Bill came into DC for a visit with me and Jenny (and her 3 cats).

On Wednesday Bill and I went to the US Holocaust Museum, which I'd been a member of for years and never seen, had lunch with my friend Erica, and went for a walk down the mall from the capital building to the Lincoln Memorial. My shoes were bothering me a little so I took them off and did most of the walk barefoot. It was nice. Bill went to see about going to the top of the washington monument (couldn't- missed the last elevator tour and they won't let you walk up) and I walked ahead. He got a picture of me walking in the grass and another sitting on the steps of the lincoln memorial. I don't know why he never took a picture of me from the front. Later in the evening I admitted my feet hurt a little but knew that the tingling on the bottom was just toughening. As I expected, they felt fine the next day (I used to walk barefoot nearly everywhere, once upon a time).

Wednesday night we went out with Jenny for a lovely dinner of cuisine from El Salvador, and Thursday I took Bill back to the trail. We went for a two-hour hike up the trail and back and he hooked back up with Laces, who took our picture. Then I drove back to DC and saw where Jenny works and she took me back to the airport. Today (Friday) Bill and Laces were planning to attempt the Quad-state challenge: hiking from PA to VA, through MD and W. VA along the way, in a single day! That's about 44 miles. Laces was feeling confident. She'd hiked 33 miles the day before. I hope they succeed.

It was nice hiking a couple miles of the trail with Bill, seeing what it's like to follow the blazes as other trails cross the AT and the AT crosses game division borders. The AT is marked with white blazes and the borders are marked with white splotches. It's not that tricky once you know that, though Bill says the trail in PA is particularly well marked compared to other states. I saw a brilliant orange mushroom and when I commented on it Bill said they come in lavendar too. Can you imagine a lavendar mushroom?

Bill is planning to hike the rest of the trail back down to the beginning in Georgia. He'll be going back over some territory he already hiked, but in the other direction. I'll likely see him again in late November, when we're planning to have an end of hiking party shortly after he comes home.
Subscribe