Yesterday I took a day off. I mean, I got up early with Rosie, I read her books, I made us breakfast, later I did dishes, prepared lunch for all three of us, took Rosie with me to the post office, and grocery shopping, and cooked dinner, then helped get Rosie ready for bed. But Brian took care of Rosie for most of the day, and let me rest, and read (Nicola Griffith's Ammonite --good book!), so it felt like a day off.

After breakfast I was tired, and cold, and fell asleep in a nap on the couch after breakfast while Rosie played. Brian came down and woke me and sent me upstairs to bed, and later I took a slow shower with self-care afterward like cutting fingernails and toenails, and putting cream on my overly dry feet.

When I went downstairs Brian and Rosie had begun to make boxes into an ice palace for her Anna and Elsa dolls, and for a little while before dinner I sat and read and enjoyed the last glass of eggnog (+ rum & nutmeg) while they decorated the palace before I got started on dinner.

Brian couldn't drink the eggnog because he got his gall bladder taken out on Tuesday, and is on a low fat diet for a week or two.

Also on Tuesday, we had significant snow for the first time this winter (about 3" in some places). Decent packing snow. So Tuesday I walked Rosie to school in the snow, walked back and shoveled the driveway, drove Brian to the hospital, went to my Zumba class, went home and walked back to Rosie's school to pick her up (school is only a few blocks away), fed us lunch, tried to shovel the driveway again so we could go visit Brian, and got detoured by the eager-to-go-sledding child into shoveling the snow into a pile so she could have a ramp/slide like her grandpa made for her last year. We have a much shallower hill but it's just off the driveway, which helps. Here's Rosie "helping" me shovel the driveway: 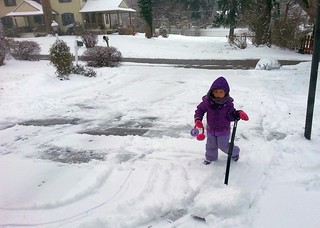 (Note: she is pushing the snow toward the garage...)

We did eventually get the driveway cleared, right around when Brian texted to say he was awake, so we went and got him some flowers and took those, some family photos, and an overnight bag (and his phone charger!) to him at the hospital and had a nice visit. Brian was pretty out of it still from the anesthesia, but he was glad to see us, and I and the nurses helped make him a little more comfortable. Then I took Rosie to her swim class, and home for dinner. She didn't "feel like having daddy stay at the hospital overnight," but she wasn't fretting too badly.

Brian's gall bladder had turned out to be infected and have "hundreds of stones" so although they were able to do the surgery laproscopically he stayed in the hospital until Wednesday evening so they could give him a dose of antibiotics. Rosie and I visited him briefly right after her morning school, then were out all afternoon at an appointment, and then we saw Brian at home (a colleague of his checked him out while we were away), and I took Rosie back out for her tap class at 4:30, and she stayed in childcare while I had an aerobics class before dinner. We put the child to bed together and then I helped Brian take a shower -- he didn't need much help, actually. I changed a dressing and helped him dry off afterward.

Thursday I found out a classmate of Rosie's had indeed signed up for a Superhero Adventure class I'd suggested they do together Thursday afternoons, so I quickly signed up Rosie, and spent the first half of the afternoon adding elastic to the top of Rosie's wonder woman boots covers to try to make them stay up, and altering her arm braces so they fit over her forearms. Here are the girls after class: 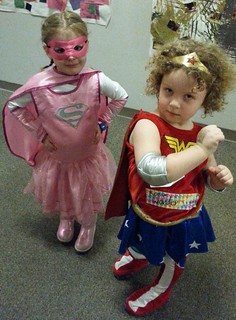 After that, Rosie wanted to go swimming, which is what we'd talked about the night before, so we did. There was another girl there Rosie's age, whose mom was trying to coax her into the water with all kinds of toys. Rosie happily dove after the toys, and kept trying to return them. She loves the water, which I do too, so I'm glad. Rosie's swim instructor was there giving a private lesson, and Rosie was happy to see her. Later, as we got out of the pool I heard the instructor comment to the lifeguard, regarding Rosie, "That personality! That's what you live for!"

I know that feeling.

We went home to dinner cooked by a somewhat recovered Brian, and then I crashed, all of the exercise, etc. of the previous three days finally catching up to me. Friday I helped drive Rosie's pre-k class to the college campus for a walk along the creek there, and she had a playdate at a classmate's house for the afternoon, so that gave me a break too. Still, by Friday night I was Tired. Saturday, I really needed a break, so I'm glad Brian was supportive. I'm also glad he was feeling well enough to do that.
Collapse