In the past month, I have changed the world. Well, at least locally. They aren't big changes, but they affect more than just my household, and I thought I would post about them.

1. I got the Township to Fix a Broken Crosswalk Indicator

We are living in the SW corner of York, PA, in Spring Garden Township, on Spring Ln - just south of Country Club rd, and just East of the intersection of Richland and Country Club.

We walk our 4-year-old daughter to school. She is enrolled in Pre-K at York Country Day School. It is just a couple of blocks from our home - about a ten-minute walk if you go directly. But at first it seemed frightfully unsafe to do so.

Partly, it is scary because we have to cross Country Club to get to a sidewalk. There are no sidewalks on our side of the street, and not even grass all the way toward the school, which is on the other side of the street anyway. This section of Country Club is a very busy street, with lots of huge trucks. It serves as a feeder to and from the West side of York to I-83, as well as highway 74. This traffic comes South down Richland and turns left onto Country Club rd, or goes West on Country Club and turns right on Richland. Sometimes we have to wait a long time for a gap in traffic that lets us cross the street. But when a gap does come, we usually have plenty of time to cross.

The pedestrian crossing at the intersection of Richland and Country Club rd also feels very dangerous. Though there are marked crosswalks there on the North and West sides of the intersection, and buttons to push to indicate you intend to cross as a pedestrian, as far as I could tell, when we first started walking Rosie to school, the WALK sign was broken on the NW corner of the crossing. The orange/red hand signalling DO NOT WALK showed up just fine, but when the traffic lights facing Richland were red and the sign ought to have turned white, it turned blank and dark instead. 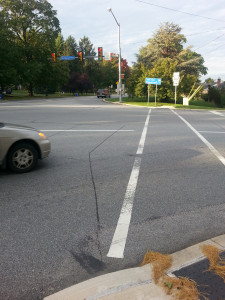 This is the crossing sign that faces East, toward the traffic coming along Country Club Rd. The traffic light for that lane never turns red. The green arrow becomes a full green light, then changes back to a green arrow without pause. Traffic does not stop. Indeed, it usually barely slows as cars and huge trucks barrel around that corner. Pedestrians are expected to cross when that fast turn lane has a full green light.

When my daughter and I are crossing from the NW corner to the east, drivers can see us crossing, and they stop to let us through. When we are standing on the Eastern side waiting to cross, however, they do not stop. They do not see us. If the white crossing sign came on, they would at least have a visible, high-contrast, recognizable indicator that pedestrians might be using the crosswalk.

But it didn't work.

I called the township to report this in early September. The person who answered the phone didn't know if it was something the township is responsible for or not, since Richland is a big street, and it's right on the border of the city of York. She directed my call to an answering machine, where I left a message. Weeks later, the walk sign was still broken. So I wrote an email to my township commissioner, Matthew R. Shorb.

Commissioner Shorb was very responsive. He contacted the right department as well as another commissioner, determined that the township *was* responsible for the intersection, and got them to commit to fixing it soon. I wrote to him late Wednesday night, and by Friday morning it was fixed.

It's still a dangerous intersection, and we cross it with great care. But it's slightly less dangerous than it was, because I made sure they knew it was broken.

2. I got a Tree Trimmed that was Obstructing the Sidewalk in front of a Senior Center 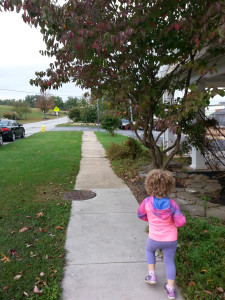 Also between us and Rosie's school is a retirement home called Colonial Manor. I'ts right next door to her school. The front has a drive-through drop-off, so most pedestrians going in the building don't use the very front sidewalk, which is in front of the covered drop-off area. So it wasn't that surprising that a small tree in front there had gotten overgrown and had branches sticking over the sidewalk at approximately the height of my chest. Rosie could walk right under it, but I couldn't.

I could see where the tree had previously been pruned so as not to obstruct the sidewalk before, so when I got tired of either doubling over to pass under it or stepping off the sidewalk to walk around it, I gave them a call. The grounds maintenance person I spoke to had not noticed the tree was overgrowing the sidewalk, and it was pruned the next day.

How do I know this affects people other than just us? Now there is a resident of the home who takes himself out there on nice days and sits under that tree with his wheelchair on the sidewalk, just before lunchtime. He himself obstructs the sidewalk, but we don't mind. He smiles and waves to us when we pass by. He never speaks and my guess from his appearance is that he's had a tracheotomy. I've explained to Rosie that he probably doesn't have much of a voice, so we sometimes talk to him and don't expect him to talk back and he sometimes nods or shakes his head if Rosie asks a question.

There still aren't a lot of pedestrians there, probably since the sidewalk only goes as far as the end of the retirement complex, and then there's a grassy break before the corner of a risky crossing. It's too bad, though; York Country Day School (YCDS) goes all the way up through high school, and some of those upper school students take classes at York College of Pennsylvania, which is less than a mile away (Brian works there, and he walks from our house). YCP students also do internships at YCDS. It would be better for the environment and individuals health if they could bike or walk that distance. I may do more to try to get that situation improved in our time here, but only if we can also make the intersection safer.

In the meantime, don't be afraid to speak up if your world needs changing. Sometimes the people responsible just haven''t noticed something needs to be taken care of. 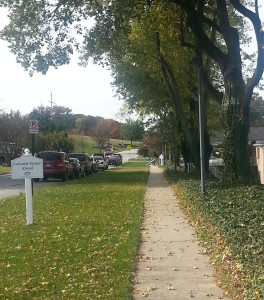 When I worked in technical theater, one time I worked with a head carpenter who would make crass jokes and sexual innuendo regarding a 14-year-old female apprentice, right in front of her, and tolerated the same in the other young men he was in charge of. The girl was very pretty, skinny but well-endowed for her size and age (which is a combination that makes the breasts really obvious, no matter what you wear), and she got a lot of attention. When she told me about it, I went and had a talk with him. I wasn't censoring him. I wasn't his boss, I was another worker in the same shop. I was telling him that what seemed like fun was damaging this girl, that though she might smile and play along in the presence of him and the other guys, because she wanted to be liked, in truth she felt unsafe, objectified, and mistreated. (I didn't use those exact words. I didn't know the term objectified back then).

When he told me this was technical theater, it was a man's field and everyone did that sort of thing, I told him I didn't care about everyone. I wasn't talking to everyone, I was talking to him. I believed he was a good person, and I expected better of him. And things did get better.

This is the same kind of message that's coming from Felicia Day, directed at gamers. She's saying she knows most gamers are good people, that games are beautiful things, and she hopes people will focus on coming together to do things we love and share the joys in that AND not think it's okay if other people are hurt or threatened by activities by people in the community that are _not necessary_ for gaming to be fun and awesome.

It should be okay to discuss issues about sexism in games, or any other issues and ways the industry can improve. It should be safe for _women_ to discuss those issues, in public, as directly as men. But some people obviously don't feel that way. As they posted on The Guardian, men like Chris Kluwe have made very nasty attacks on gamergaters and never had personal attacks or terrorist threats directed at them in response. But women keep having that happen to them. This is worse than sexist. It is very very wrong.

My friend Andrea Phillips, who is both a gamer and a game creator has also written about her anger and fears regarding GamerGate. If you aren't commenting on this on the blogosphere, that's fine. But I hope you're still paying attention, because this is important.

I really really hope it's just a few people making the death threats, and that the authorities find them and shut them down. But I think it's important for the whole community to think about the long-range implications and impact this is already having on our community. It's not okay for a small group of people to make a whole gender of people feel attacked and unwelcome in a field, and we need to be sensitive to the message these events are sending to girls and women who haven't even gotten involved in gaming about whether or not they want to go down that road. Whether it was the original intent of #GamerGate or not, we need to focus on messages like Felicia's.

Anyone who enjoys gaming should do it. Anyone who does it has every right to be critical of any part of it, without fearing that they will be personally attacked, online, at home, or anywhere.

Don't let the bastards grind you down.
Collapse