We are fast approaching the deadline of December 22 to vote for TAFF!

Short version: Go get a ballot and vote! For us, even!

The trans-atlantic fan fund sends fans one way or the other across the ocean each year, to either a major event in North America or to one in the UK. This year's TAFF delegate(s) will go to Eastercon in London. See http://www.taff.org.uk for more info.

I have never been on a visit to London. Neither has Brian. We would very much like to go meet fellow fen there, and would probably extend our trip to Scotland, Ireland, and Germany, as well as other destinations in England.

TAFF, like other fan funds, is supported by donations. Any sf fan who wishes to vote is requested to send along at least a small donation to the fund with your vote. Other than that, any fan can vote (if you don't think the TAFF administrators will recognize your name, you are asked to name a well-known fan who knows you and can vouch for your fannishness. This is to keep us from passing out ballots on the street corner, but is not intended to discourage fen from voting. If you do this, you have to name someone other than ourselves or any of the people who nominated us for TAFF). The voting deadline is December 22.

The TAFF ballot is available online at http://www.taff.org.uk/ballots/taff2010.html. You can print it and send it with a check to vote. Or, if you want to vote online, you can; there are directions at the bottom of the ballot. It involves sending a paypal donation (please add extra to cover paypal fees) to one of the administrators ( e.g. Chris Garcia at garcia [at] computerhistory.org) with all your voting info in the paypal comment. If Brian and I get chosen we'll make sure there's a full online voting form in future years.

We are committed to going to Eastercon if selected, and to administering the fan fund diligently (raising money for it and running the selection process) for two years, as well as of course producing a trip report. As to other destinations we might take on our trip, we're not quite sure, but they would definitely include Edinburgh, Scotland. I've an old school chum there I haven't seen in too many years, plus Charlie Stross offered to give us a tour! Can't beat that with a stick. Here is our platform from the ballot:

Brian Gray & Anne KG Murphy
He's a microbiologist. She's an engineer. Together they run cons, playtest games, sing and dance, concoct gustatory delights, write zines and blogs, perform sketch comedy, and generally have a good time doing anything from reading sf to chopping wood. (We didn't say they aren't weird. Oh YES, they're weird.) They promise to use their powers only for good, and not run scientific experiments upon unsuspecting international fandom... however tempting that might be. But as trained observers, they look forward to documenting cultural differences across the Atlantic divide in a trip report. An eeeeeevil trip report. With photographic evidence. And tissue samples...

You can also see more about us, and our friendly competition (Frank and Brianna Spacekat Wu), at Chris Garcia's fanzine The Drink Tank, issue 231.

flinx and I thank you for your support.

Mine started out well. Friday night I dyed my hair a dark auburn that's actually not unlike the color it was in this user icon picture from 2008. More recent pictures start here. Then I relaxed in bed reading Slow Fall to Dawn, Stephen Leigh's first novel (Stephen and I went over his "brag shelf" last time I visited and he was kind enough to give me this along with other early paperbacks). It was really quite a lovely evening. 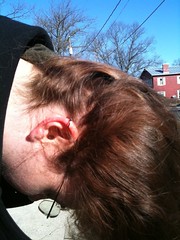 Saturday I went to a casual adult dance class that turned out to be basically modern dance, with four other women including the instructor. Just an hour, which compared to the 1.5 hour classes I mostly took at the Gallery seems like just enough time to get warmed up, but it was still nice. Plus it was a sunny day, as you can tell from the pictures on this post. I spent some of the afternoon working on Wellspring, and some wrapping presents for the families my company has adopted for Christmas, then got ready to go out for the evening.

My housemate, Kate, joined me and another friend, Steve (I know a lot of Steves), in heading to a Japanese/Korean restaurant for dinner and on to the Cincinnati Fantasy Group's Christmas Bash for Saturday night. Sadly,

parsleigh were unable to be there, but still I was able to introduce Kate and Steve (who are both SF writers themselves) to many fine CFG folk, and I was of course delighted to see people as well. There was much pressuring for me and Brian to come down for the Extended CFG New Year's celebration (and hinting from Becca that we should contribute Belgian Waffles to New Year's Day brunch), and I was in touch with Brian by text about that and an immunology question from Becca (a cat has caught H1N1 and she wanted to know how - Brian looked it up then explained that's a do-able mutation from the avian flu, H5N1, which cats have caught before). Steve helpfully drove us home to Yellow Springs, and we all agreed it was an enjoyable night! 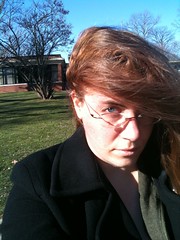 Sunday I dealt with an Unfortunate Incident about a Mouse and generally had a bit of a down day, though I also cooked a pork roast with a nice rub of Brian's concoction (He'd left a bag of it in the freezer) that had been setting in for about three days, along with some apple, pineapple, onion, and carrots. Oh, and, separately, a butternut squash. I felt better after I spoke to Bri on the phone for a bit while stuff was cooking, and Kate made a really nice salad with a tahini dressing to go along, so dinner was good, and then I had a decent meeting of the African-American Cultural Works group, planning the local Kwanzaa celebration for December the 26th. I turned in early though. 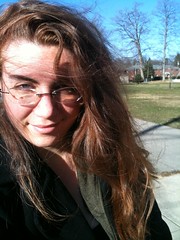 Today has been a bit better. This morning I sent an article about Kwanzaa to the local paper, then after work I got in a workout at the gym. I followed that with another workout at home for my ankle and shoulder physical therapy (playing with the Bosu a wonderful friend got me as an early Christmas present) while cooking something experimental for dinner. A little more work on Wellspring as well, some updates to my website (mostly putting stuff back up that got missed on the last move, like this), and just now a chat with

You all are too far away, I swear.

How was your weekend?
Collapse