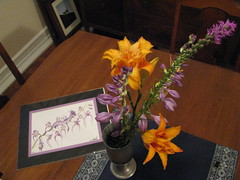 flowers inside! look, they match my new picture!
Originally uploaded by netmouse.

I bought a painting at MidWestcon called something like Dragon Orchids. The other day I picked some flowers from my garden and rather liked how they went together...

Re: the kids in Philly who were forced to leave a swim club in what appears to be a violation of section 1981 of the Civil Rights Act, if you'd like to condemn the Valley Swim Club's actions and encourage the Department of Justice to consider suing them for a violation of Federal law, go here to do so.

I can no longer relate to how people eat as much in a regular meal as many people do. For dinner tonight I had a leg and a thigh and a wing from an adorably small roasted chicken plus a small pile of green beans and shitake mushrooms, served in a garlic miso sauce, and I'm still feeling overstuffed an hour later. It was the wing that did it, I bet. :P

My guitar is lying on my bed looking wounded. Not wounded in the "how could you do this to me" way, but literally wounded, since one of her strings has sprung. It's probably past time to put a whole set of new strings on her, which I would do if I had any idea how. I think I even have another set. Maybe there's a musical instrument store around here that could help me...

In the meantime, I find playing without the 5th string kind of fun. G and C are both much easier chords with only 2 strings held down. Tonight I reminded myself how to play folk underground's Tea and Corpses, which is a simple arrangement of G, C, and D. And also a fun song to sing. :)

(though it would be better in 3-part harmony)

And now I think I'll play Man in the Long Black Coat and go to bed.
Collapse