The first-ever ArbCamp will be held Saturday, October 27, 2007 in Ann
Arbor, MI at the Morris Lawrence Building at WCC - and you're
invited! You can attend ArbCamp for as little as $5.
http://www.connectannarbor.com/index.php/arb-camp

A one-day, open-space event, ArbCamp will focus on technology and
social networking, as members of the greater Ann Arbor community
involved in marketing, business and technology converge to make things
happen, launch new companies, learn new ways to engage customers,
discuss the latest technology and get to know each other.

"Arb Camp is an open space technology event that will bring together
the "right people" to make things happen in Ann Arbor. Come see what
other companies are doing in Ann Arbor. And plan to participate."
( Collapse )
For information and tickets visit www.arbcamp.org. $15 gets you
admission to the full day conference. Add $50 for the Jaffe keynote
($60 after Oct. 18), keynote includes two copies of Join the
Conversation, a $60 value. Full day event + keynote is $65. Students
pay $35 for the day. ArbCamp is made possible by the generous support
of Hass MS&L , Ingenex Group, MISBTC, 3.7 Designs, About Us, Washtenaw
Community College, Nicola's Books, VG Kids , Leaders Connect and Pure
Visibility.

jlassen points out that a quarter million people have been evacuated from their homes in San Diego, and the fires are expected to make it all the way down to the north shore.

Just in case you needed a little perspective this morning.

I called Granholm's office to ask if she's considered sending assistance. I left a message asking them to call me back.

I've been up since 7 but didn't make it into work until after 10. The day seems to be going in slow motion. Some days are like that. They're still better than being chased out of your home by a fire. 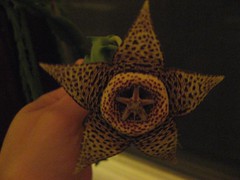 The cacti are blooming. As I looked around at the various Christmas cacti, which are just starting on buds, I noticed this unexpectedly impressive flower from a cactus given us by Hedwig Biggle. 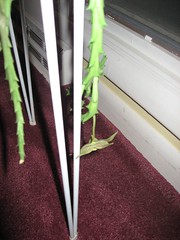 I accidentally knocked over the christmas cactus a couple weeks ago and so now have some plantings from it and this cactus (which is in the same pot -pieces of both broke off and were given to root in other pots) so if people want some, let me know and I'll put you first in line after Bill picks which (if any) he wants. I know I still owe someone a christmas cactus. Sorry about the wait.

I just have to say, my observation of mentions in peoples' blogs supports the substance of scalzi's (slightly fictionalized) conversation with a friend from California about what is the big news story right now.
Collapse