yaleartificer reports on the xkcd event.

Sometimes, when I read various "Call your senator now and press for change!" campaigns, I feel oddly helpless, not because my senator won't listen -- on the contrary, he's already on my side and fighting as hard as he can. Senator Carl Levin is one of the senior Democrats in the senate. As chair of the senate armed services committee, he is pressing for change in the approach to Iraq, and on many topics I have had cause to feel proud that he represented me and my state.

He was going to retire at the end of this year, but we need him too much. His family wanted, and deserved, to have him decide to stay home and take a break when his current term ends, but he has decided instead (with their support), to run for re-election.

I know everyone's tight for cash in the current economy, but I just wanted to say, if you're up for helping with senator Levin's re-election, I'd appreciate it. 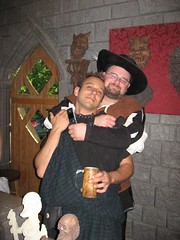 I went to Ren Fest on Saturday to hang out with

atdt1991 and friends. We started and ended the day at Tomak's Nethercraft booth, where we hung out with Chuck and Tomak and Barb. I also swung back and took a nap up in the loft in the middle of the day (so there's a bell. You can still nap. Well, if they know you're trying. *grin* They noticed eventually). My pictures of the day thus start with me sweeping out the booth, something I guess Sken found picturesque. :)

I was very pleased to meet a bunch of neat new people and to see some old friends. I did not finish my garb for the event so I was just wearing festish-type clothing. It was beautiful weather that day, and I was glad I got outside in it. The people were lovely too.

It was also beautiful weather the previous dance weekend when I rode the motorcycle up to Camp Cavell (north of Port Huron), of which I have also posted my pictures. No, I don't have any pictures of people dancing. I was busy dancing or something. Crazy.