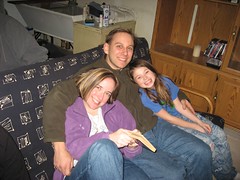 Last Sunday I went over to Chuck's to watch the superbowl and criticize commercials. It was fun. I've posted a set of photos of Chuck's party on flicker.

I know other photos were taken - please let me know if they're posted, and where to see them. 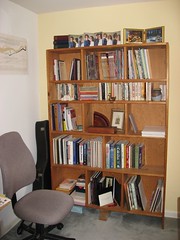 Last weekend I pulled everything off my office bookshelves, dusted and sorted, moved the bookshelf from being against the white wall to being against this wall (a move from one side of the corner to the other). I didn't take a "before" picture but anyone who's been in my office may remember that this corner had been piled with boxes and bags, with the shelving unit stacked to the gills with STUFF, including more boxes and junk on top.

Now there is space on the bookself and around it, and a space for my guitar, with a single book section for music and guitar stuff. I'm still working on finding other spaces for some of the boxes that were on top, but in general this feels like a huge improvement to the office.

You know, in a lot of ways, I really appreciate the community at Ann Arbor eCycle. But somewhere around a quarter to a third of the responses to my postings of a guitar and a bike have been IN ALL CAPS!

Can anyone explain why any normal people would think that's a reasonable way to write to a person?
Collapse