I seem to have worn myself out with fiendish plan # 29, which involved clearing the empty boxes out of the workshop and moving the full boxes around so that Bill can get to his stuff that's there in the back and we can get to the pegboard, where I added pegs and hung up a bunch of things, in front of which I also (Ta da!) cleared off a work/sorting space on one of the two worktables. Took stuff out of bags from Stadium Hardware and various boxes, sorted it a bit. Bill has some awesome-looking drill bits he got from his dad. I'm just saying.

I also dusted my little shelves of bric-a-brac, which needs to be done at least every two or three years, I insist. It's always nice to revisit memories that way. I have quite a few things from our Route 66 trip, and some from my childhood, and from high school, which includes one pewter horse that a friend of mine gave me for safekeeping when she moved out of her parents' house and lived with us for a while, and then heading off on her own, future uncertain. I need to get that back to Jane. I've tried inviting her over for dinner but she's a volunteer firefighter on top of her day job (firefighting) in IT and her schedule is a bit erratic. I should try again.

Time to do some errands, I think. Hope some of you are enjoying sunshine, somewhere. It is unrelievedly grey, here, but at least some of the trees still have color, so there's beauty of a sort. 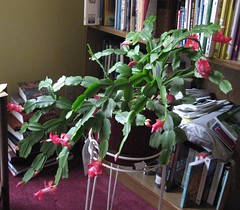